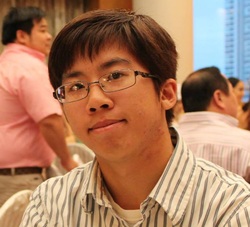 Hey there, my name is Varanon Austin Pukasamsombut.
Just call me Austin, unless you wanna try saying my full name for fun.

I am a Thai-American student studying at the University of California San Diego. I'm an electrical engineering student with a passion for robotics. I also love Japanese culture and will be minoring in Japanese studies. I will probably graduate in 2017.


This blog is to share my study abroad experience and my daily life in Japan, as well as interest other students (especially STEM students) in the idea of studying abroad.

I'm basically going to make this "about me" page a blog post... about me. That's how it works, right?

So first, let me talk a bit about myself. My parents came from Thailand, but I was born in Los Angeles, California. I started becoming interested in Japanese culture when I was in middle school, when I started watching anime and playing video games. My favorite anime at the time were Shaman King and Love Hina. Anime, for those of you who don't know, are just Japanese cartoons. Here are my favorite:
Then in my junior year of high school, I joined the robotics team. Well... a few of my friends and I were the only members for a while, until we got other people interested. Working on robots everyday was the highlight of my high school life. That feeling you get when you create something from your imagination with your own two hands, it fills me with a joy that can't be expressed through words. Once we won a few competitions, we qualified for the VEX world championships in Florida. We lost easily, but it was still one of the best trips of my life. It wasn't until my senior year that I became serious. By that time, we had a full fledged robotics team packed with members and supporters. That year, we made it to 7th place in our division in the world championships. Admittedly, we could've done better; but with all my friends cheering us on and seeing our robot compete, it was the most amazing experience I've ever had.
Now I am a student at UCSD doing what I love: making robots and learning about Japan. :D
Now let me talk about what actually matters: Studying Abroad!
I am participating in UCEAP's Engineering and Science in English at Tohoku University program.
I will be in Japan from June 20th, 2014 to August 2015: 14 months!
For the summer, I will be participating in an Intensive Language Program at Senshu University in Tokyo. That will last until about August, and then I will have summer vacation until the end of September,
during which I will travel to various places in Japan. Starting in September until I return to the US in the next year's August, I will be studying at my official program with Tohoku University at Sendai.
If you don't know where that is:

At Tohoku University, I will be learning from Professor Kazuya Yoshida, an expert in space robotics technology. Under the guidance of Professor Yoshida, I will perform individual research in order to expand my knowledge of robotics. This research program is what makes this program unique, since we are living in an age where on-hands experience is important. My other classes will also be filled with field trips to various places to learn about Japanese culture. I will be sure to share my experiences here!
So now, you're probably wondering what makes me so obsessed with Japan. I'm Thai, ain't I?
Don't get me wrong, I love Thai culture as well. I'm proud to be Thai-American and wouldn't ever try to change my ethnicity. [However, I do hate Thai food.... I despise spice/sour/sweet/bitter foods....]
But I just like Thailand for the culture, mannerisms, and traditions; not really for its current city state.
I do love Japan. I think Japanese food is delicious. I love the culture and traditions that it has, such as
all of their festivals, temples, onsen, and Shinto beliefs. Pop culture is also amazing: J-pop, anime, manga, visual novels, light novels, art, cosplay, movies, etc. Even its history is interesting (and I don't like history), with the Sengoku Era, samurais, and ninjas. Japan is also a high-tech country up to date with the latest devices and is one of the world's leading nations in robotics. So yeah, Japan's awesome!

And now I am getting the chance to live there for a whole year! I plan on making my time there memorable by traveling all across the country, experiencing all of the traditions, enjoying all of the pop culture, eating all of the local delicacies, and making my school life unforgettable.
Here on my blog, I will share my experiences with you so that you can know what it's like to live in Japan as an international student. So I hope you enjoy my posts, see ya!
Here's a little introductory video of myself that basically states the same thing I wrote above except in Japanese~ Honestly, I only did this because my teacher made me... But hey, enjoy~ :)
(Turn on subtitles if you do not know Japanese, and I'm sorry that the audio is low...)
I have only been studying Japanese for 2 years though, so my Japanese isn't fluent (yet).
Powered by